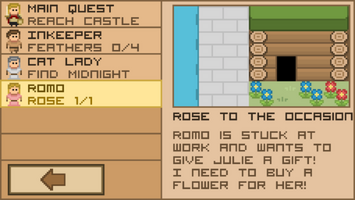 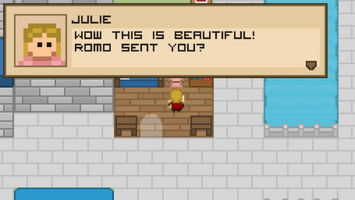 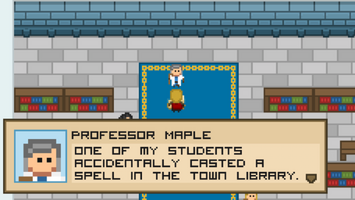 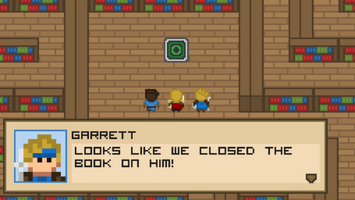 After hiking through the Southhill, braving the Giblin Cave, and trudging through the Sewers, the party finally arrives in Myria! The long journey to the next town is complete! We can finally go talk to Luther…

The party has quite a few tasks they can (and might need) to accomplish first. There are a few quests available to the party upon reaching Myria. You are immediately presented the opportunity to recruit a new character, Lt. Ethan, by completing a quest to kill some more gators (back to the Sewers!). As a Sniper, Ethan has several unique abilities. First, he is able to cycle between three different types of arrows which all raise his power, and grant him additional abilities. Storm arrows add thunder damage and a chance to stun, bomb arrows cause your attacks to do fire damage to all enemies, and poison arrows well… Poison enemies. Aside from being able to rain arrows on all enemies at once and a powerful holy attack, the rest of the Sniper class’ attacks are based on a new target system. First you must use a targeting attack such as lock on, or lock down, (the former stunning as well). Once a target has been locked, the Sniper class can use the snipe attack on them. This is a very powerful attack, that may be used as many times in a row as you want until the target dies. There is a catch, you can only use snipe on targets that have been locked. The Sniperclass also has two abilities due to the crystals collected by this point. First they have 10% piercing (similar to the Lancer). This adds a lot of damage to all of their attacks. Second, they do additional damage when attacking the same target. This comes in play when using snipe on the same target. Ethan also comes in tow with some very strong items so it is definitely recommended you pick him up!

Next, the player has the opportunity to visit the town itself! There a number stores selling equipment and potions as standard. Additionally players are able to cough up all of their gold for some very expensive albeit very powerful cloaks. Players are also able to go to the barber shop and change their hair style and hair color. Finally players are able buy relics at the flower shop. They are also able to buy a rose, which comes into handy for a side quest about two lovers!

Before being able to enter the castle and reach Luther, players must pass the Sage’s Trial. This requires the party to visit the town academy, beat up a few mages, and talk to the professor. These mages have powerful elemental abilities that magnify the elemental advantage and disadvantages. This means most magic attacks will do very little damage unless they are an opposing type. Professor Maple will express that the party needs to go to the town library and defeat the books there. The player is also presented with a quest outside the library for a powerful epic relic.

The Library mini dungeon is a series of mazes that the player must solve in order to reach the final floor and defeat the boss. The boss is a powerful book that can revive it’s allies and raise it’s defenses. There are a number of good items to find in the maze that make it worth while for the party. After completing the mini dungeon, the player is able to return to Professor Maple and be granted access to the castle!

Thank you so much for reading and I really hope you guys are looking forward to the early release as much as I am!